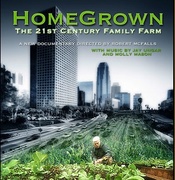 After catching "Collapse" at the Pickford January 21-23, be sure to follow up with "Homegrown" the first of our Transition Film Series, an upbeat film about a family that, while "living off the grid", harvests over 6,000 pounds of produce on less than a quarter of an acre, makes their own bio diesel, powers their computers with the help of solar panels, and maintains a website that gets 4,000 hits a day.

We'll have a short discussion following the film for any who would like to stay.

Comment by David MacLeod on January 28, 2010 at 5:49pm
Be inspired by the 10 minute youtube trailer, and invite your friends to the movie:
http://transitionwhatcom.ning.com/video/homegrown-revolution-radical

Comment by Kate Clark on January 10, 2010 at 5:14pm
This film may also have a showing in some of the other areas in our county. Stay tuned...