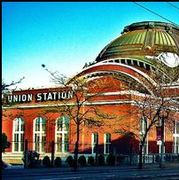 Solutionary Rail: A people-powered campaign to electrify America’s railroads and open corridors to a clean energy future was released in November 2016, just days after the 2016 election.

The authors and organizers of the Solutionary Rail campaign make the case that the non-ideological coalition they are working to organize will bring diverse and often competing interests together in support of a public-private partnership to deliver jobs and renewed prosperity to rural and urban communities alike.  They offer this hopeful message with a plan to move America forward - not backward - expanding clean, renewable energy and reducing sources of carbon in the atmosphere.

Rail, unique among forms of mass transportation, can easily be electrified. Because electricity is increasingly coming from clean sources such as sun and wind, rail has the potential to serve as a clean and reliable form of transportation while invigorating communities along the way. The Solutionary Rail book proposes overhead rail electrification, powered by renewable energy accomplished in conjunction with track modernization. This infrastructural investment will bring to the United States the reliable, electrified, higher-speed service now common on public railroads in Europe, Asia and elsewhere. Join us on Feb. 8th to meet the authors and find out more!