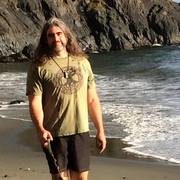 In cultures around the world, the heart has long been viewed as the seat of consciousness and the source of true expression. What happens when the heart's fire dies down? How do we rekindle its flame?

In this workshop, we will explore how herbs and simple ritual techniques can ignite, nourish, and support the heart. We will spend time with Damiana, Wormwood, Devil's Club, Calamus, and more. Come learn how to
bring back the blazing glory of the fire of the heart when cold winds have all but extinguished it.

Sean is a neurodivergent/NeuroQueer/Autistic semi-nomadic wild forest creature whose range mostly extends through the unceded territories of Chinookan, Coast Salish, Yakima and Klickitat peoples from Portland, OR to Victoria, BC. Sean is an herbalist, a writer, a poet, a teacher, and a witch.

Sean is an initiated priest of the BlackHeart line of the Feri tradition of witchcraft. In this tradition one engages in ecstatic relation with ourselves in all of our parts – human, wild, and divine– and with the
land, the gods, and the living world around us. The practice tends to ourselves, to each other, to our world, and to the turning of the stars in the sky. Sean's own priesthood involves deep work with ancestors and the human and other-than-human dead.

From 2012-2016, Sean taught herbal energetics, mental health therapeutics, and phytochemistry at Pacific Rim College in Victoria, and supervised students in clinics at the college and the Victoria Native Friendship
Center. Sean remain a member of the college's faculty, offering occasional workshops and courses.

Sean is a columnist for Plant Healer magazine and a regular contributor to Gods & Radicals.

RSVP for Kindling the Heart Fire to add comments!