Creating the New Dream and the Future of the Earth 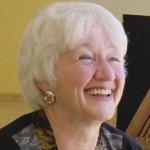 We are facing three simultaneous crises in the world today: a crisis in energy, economy, and climate. These add up to the greatest challenge in all human history. Biologist Sahtouris is optimistic about the future and points to biology saying, “Life gets creative in a time of crisis.” She explains how the survival of bacteria, which has been on the planet for over four billion years, has given us a model of how we may evolve into a mature species. In the best case scenarios in evolution there is a move towards cooperation and co-creation. She points out, “It is literally cheaper to feed your enemies than to kill them. And, in the best case scenario in evolution, those cooperative ventures become the next larger unity.” Join this fascinating conversation that gives us sound science and hope for our species and life on the planet. (hosted by Justine Willis Toms)

Elisabet Sahtouris, Ph.D.  is an internationally acclaimed evolution biologist, futurist and author. Her books include Earth Dance: Living Systems in Evolution ( iUniverse 2000);  Co-author with Brian Swimme & Sidney Liebes, A Walk Through Time: From Stardust to Us (John Wiley & Sons 1998), and co-author with the late Willis Harman, Biology Revisioned (North Atlantic Books 1998). To learn more about the work of Elisabet Sahtouris go to www.sahtouris.com

Topics Explored in this Dialogue:

RSVP for Creating the New Dream and the Future of the Earth to add comments!