The Great Squeeze and Transition to a Lower Energy Future

Come out and see the popular new documentary The Great Squeeze followed by the presentation Transition to a Lower Energy Future by Tom Anderson of Transition Whatcom on Wednesday, April 22, at 6:30 PM in the Fairhaven College Auditorium. Transition Whatcom is a newly formed local initiative that is following the popular Transition model, which originated in the town of Totnes in the UK only a few years ago, and has since spread around the world. A Transition Initiative is a community working together to address peak oil and climate change and address the big question: for all those aspects of life that this community needs in order to sustain itself and thrive, how do we significantly increase resilience (to mitigate the effects of Peak Oil) and drastically reduce carbon emissions (to mitigate the effects of Climate Change)? Tom Anderson of the Transition Whatcom initiating group will give a presentation about the Transition model and Transition Whatcom, along with some Q&A.

"For some decades now people have been talking about saving the planet, but we are realizing that this is not really the issue. The central issue is civilization itself and whether we can save it. The stresses that we have put on the earth are not only threatening our habitat, but our way of life, our prosperity and even our existence on the planet. Our current paradigm must change. We will have to accept the new reality; the human economy is part of nature and not the other way around. We are faced with great challenges, but unlike the rest of the living world, we have the unique ability to adapt and decide our fate and the fate of most of the biosphere, for better or worse, in order to survive the human project.

The event is sponsored by the Associated Students Outback. 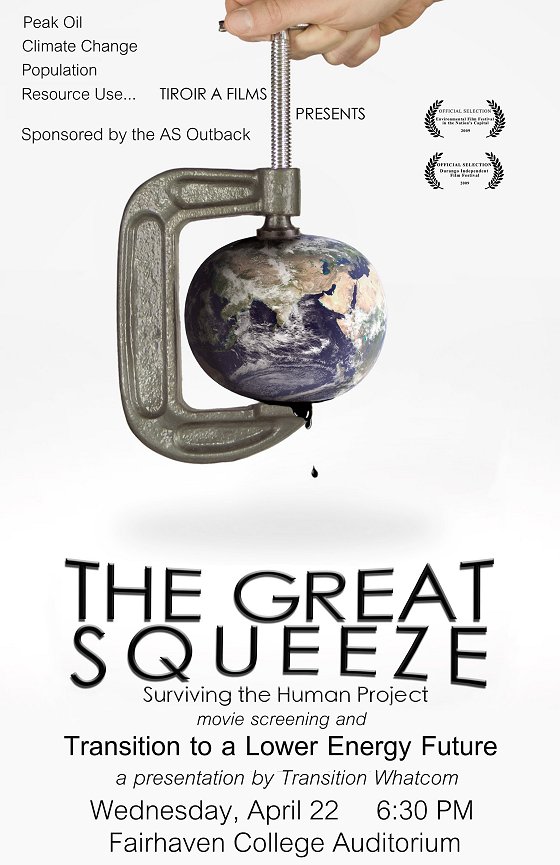