Building a Better Nest: Living Lightly at Home and in the World 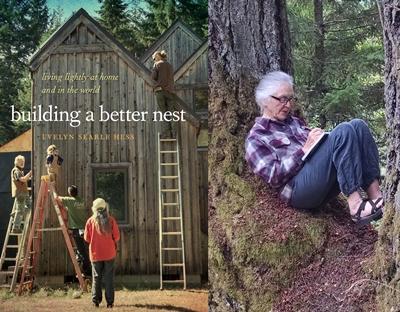 *Join us for this FREE Lit Live! event -- meet the author and get your book signed!*

For fifteen years, Evelyn Hess and her husband David lived in a tent and trailer, without electricity or running water, on twenty acres of wild land in the foothills of the Oregon Coast Range. When they decided to build a house – a real house at last – they knew it would have to respect the lessons of simple living that they learned in their camping life. They knew they could not do it alone. Building a Better Nestchronicles their adventures as they begin to construct a house of their own, seeking a model for sustainable living not just in their home, but beyond its walls. As Hess and her husband age, the questions of how to live responsibly arise with greater frequency and urgency. With unfailing wit and humor, she looks for answers in such places as neuroscience, Buddhism, and her ancestral legacy. Building a Better Nestwill appeal to anyone with an interest in sustainable building, off-grid living, or alternative communities. The questions it asks about the way we live are earnest and important, from an author whose voice is steeped in wisdom and gratitude.

Evelyn Searle Hess lives in the foothills of southern Oregon’s Coast Range. At various times a teacher, greenhouse manager, gardener, garden designer, and a native-plant nursery owner, along with being a mother, grandmother, and now great grandmother, she currently weeds, writes, and tries to put up her garden produce before the critters get it. In spare moments she helps husband David with their life project, building a house. Hess’s previous book To the Woods won the 2011 WILLA Literary Award for Best Creative Nonfiction.

RSVP for Building a Better Nest: Living Lightly at Home and in the World to add comments!