First Brian and David made "socks" out of landscape fabric to line the sink holes: 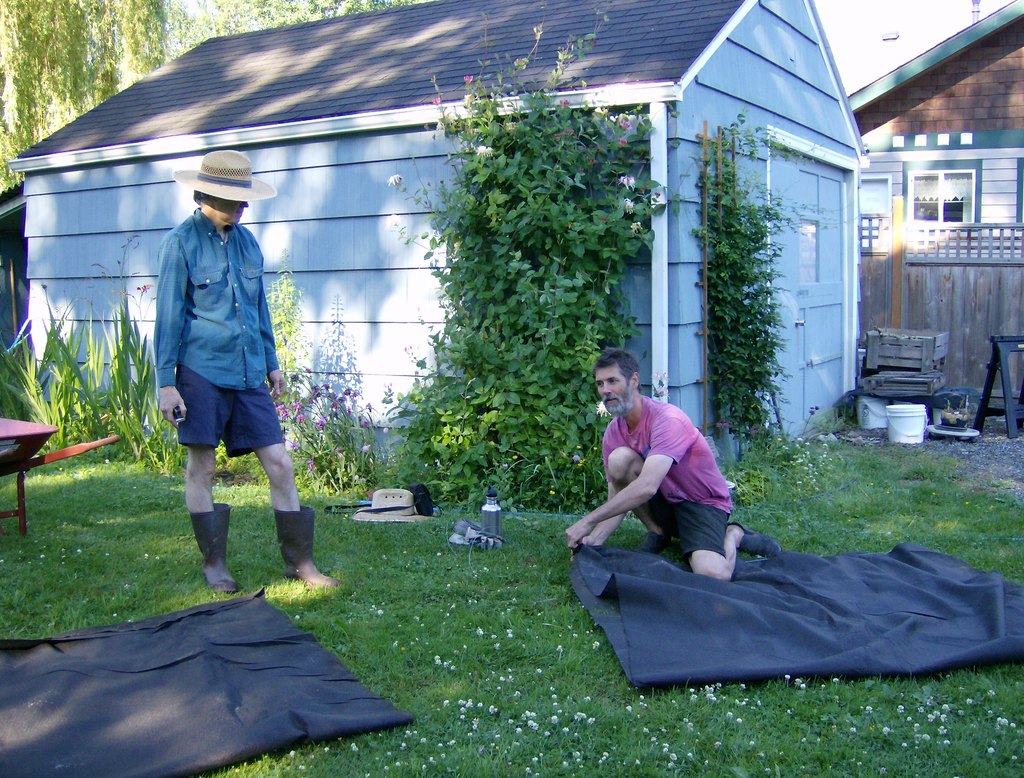 Next Brian explains how we'll fill the sock-lined holes: 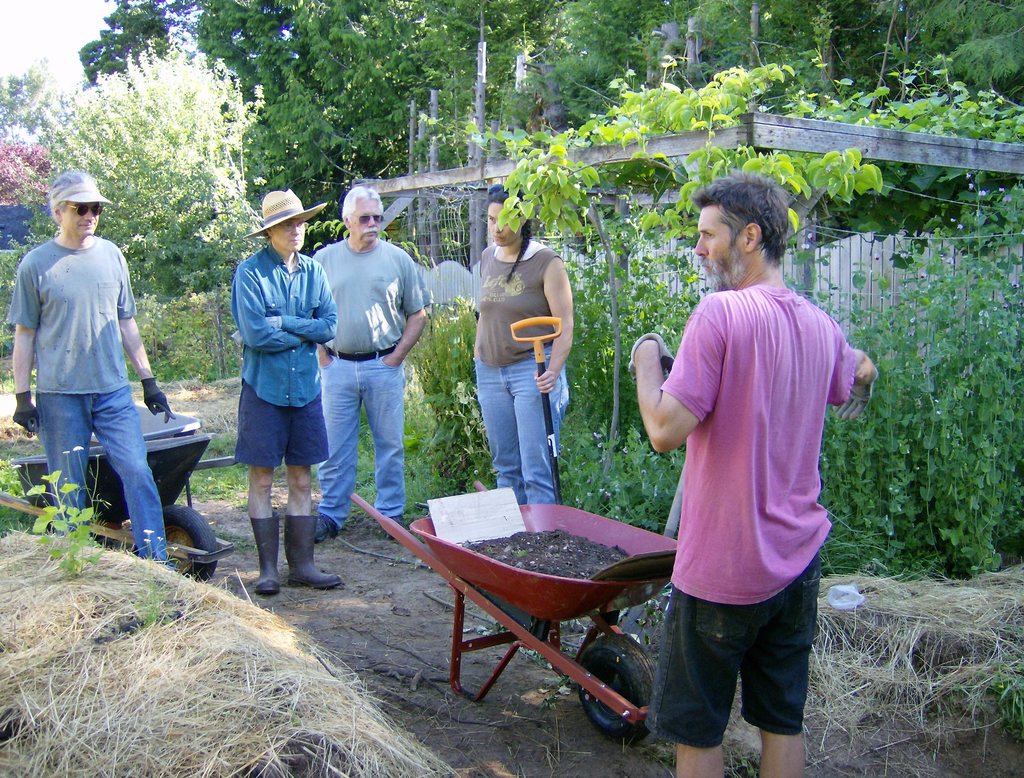 Here's what one of the sink holes looks like with the "sock" and some of the 2 inch gravel. The landscape fabric will let water through but not soil or silt, This is the "sink" that will store water and let it percolate out as needed by the surrounding soil: 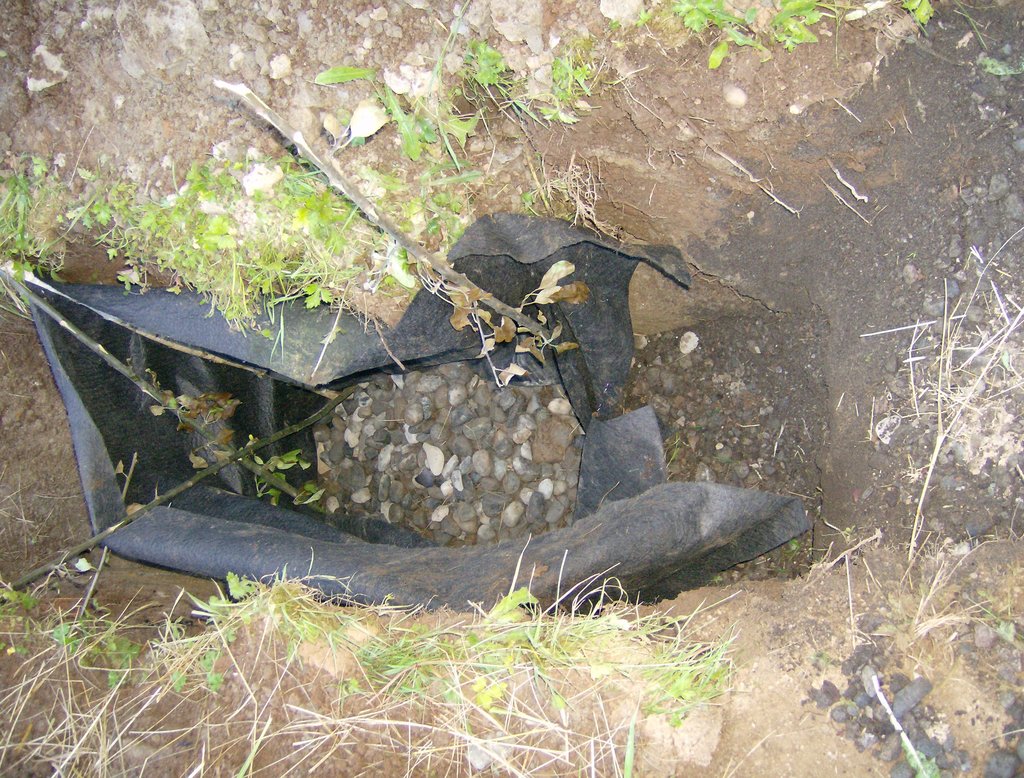 Laura shovels gravel into the wheel barrow. It's already getting hot!: 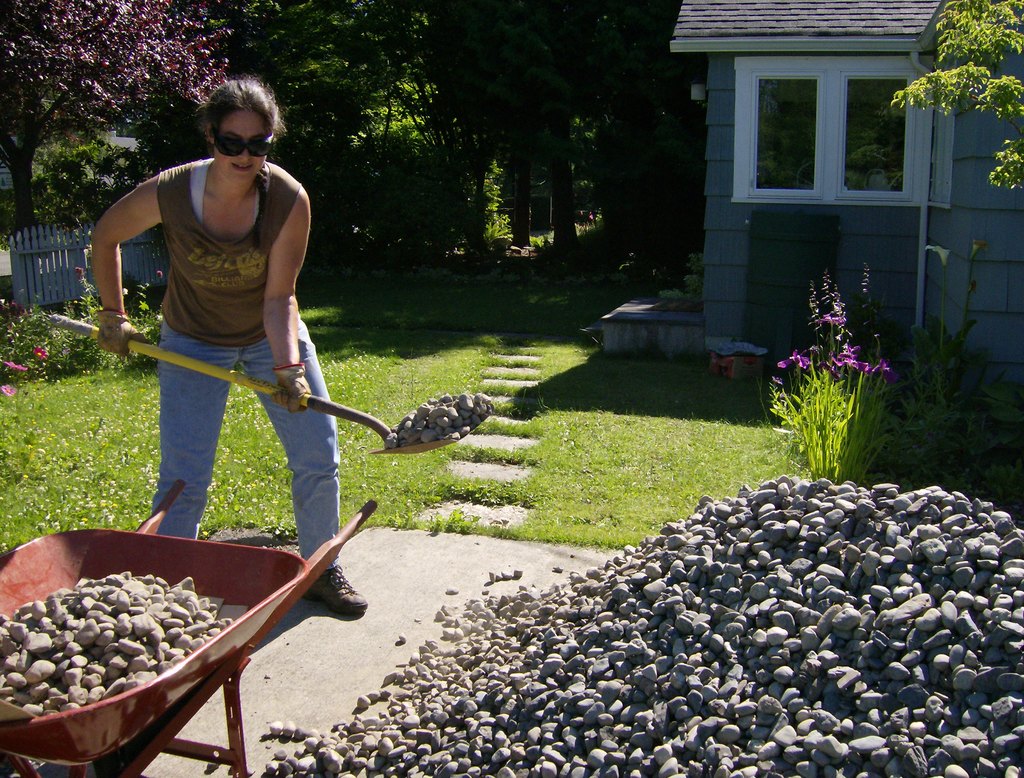 Carefully pouring and guiding the gravel into the sink hole: Keith tamps the sinkhole that has been topped with soil so it's level with the rest of the swale ditch: 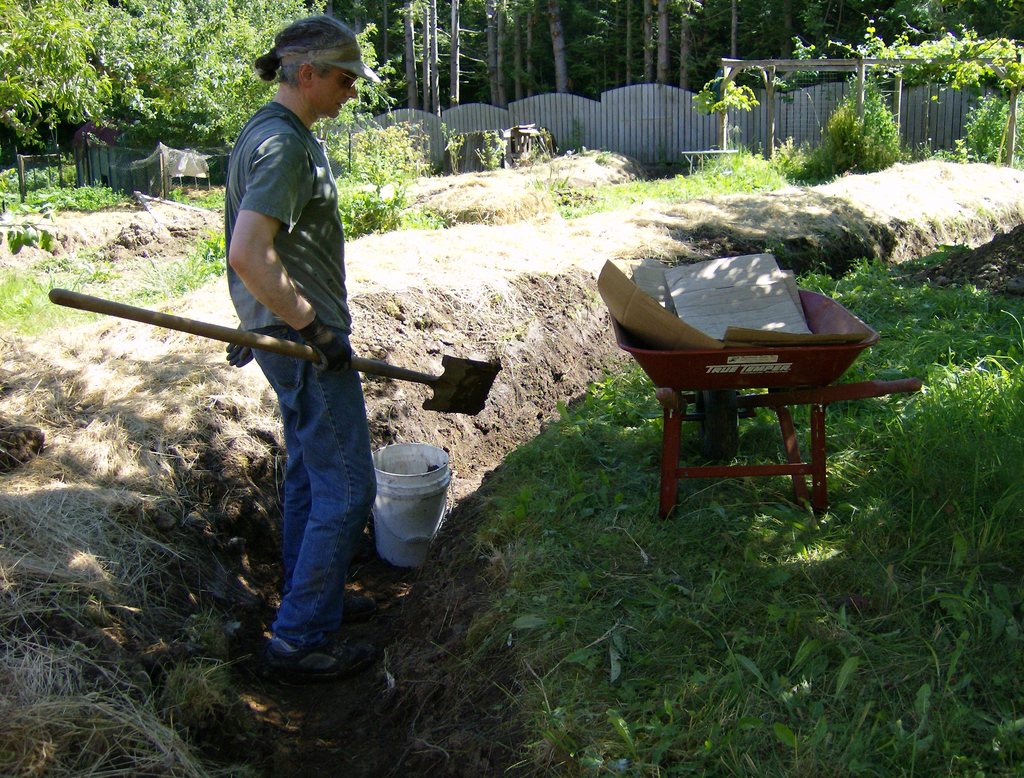 David topping another sinkhole with soil: 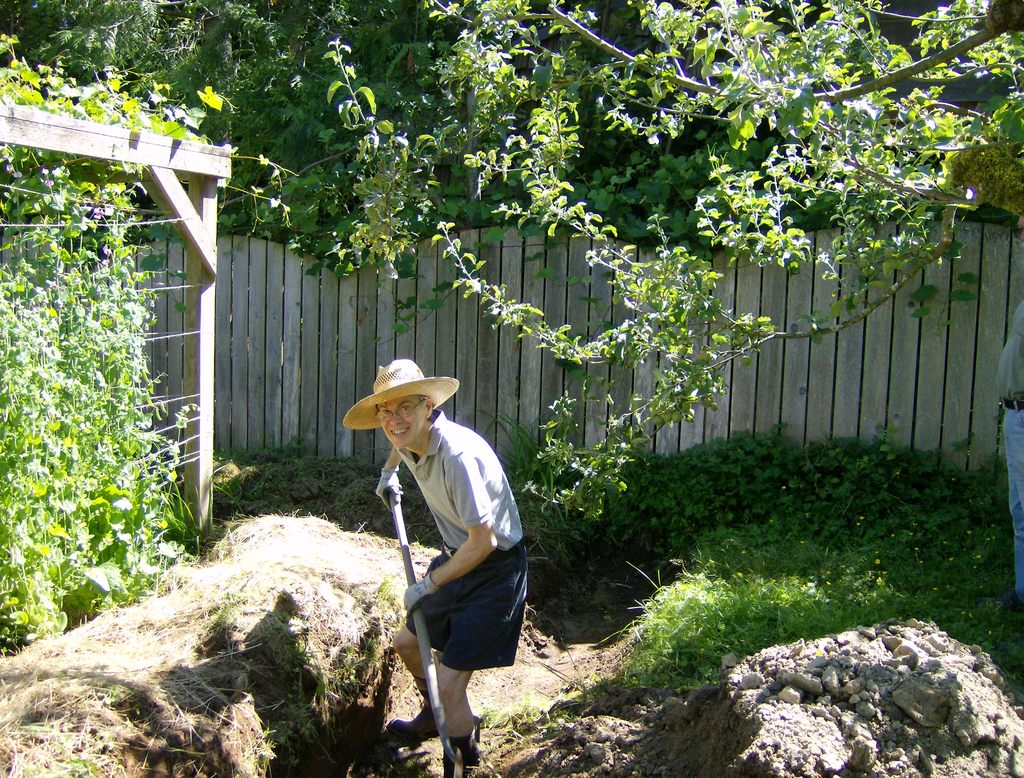 Brian explains how the spillway works and gets a little more shaping done: 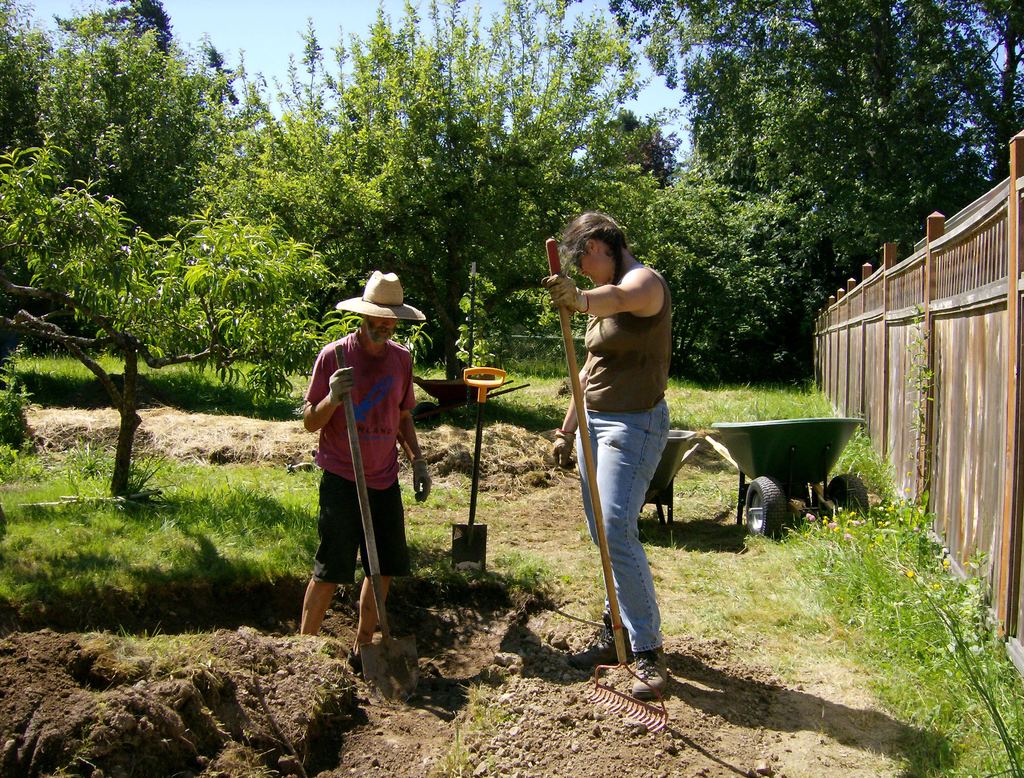 And viewing the same spillway from the other direction, Jerry is fanning out the raised area near the spillway: 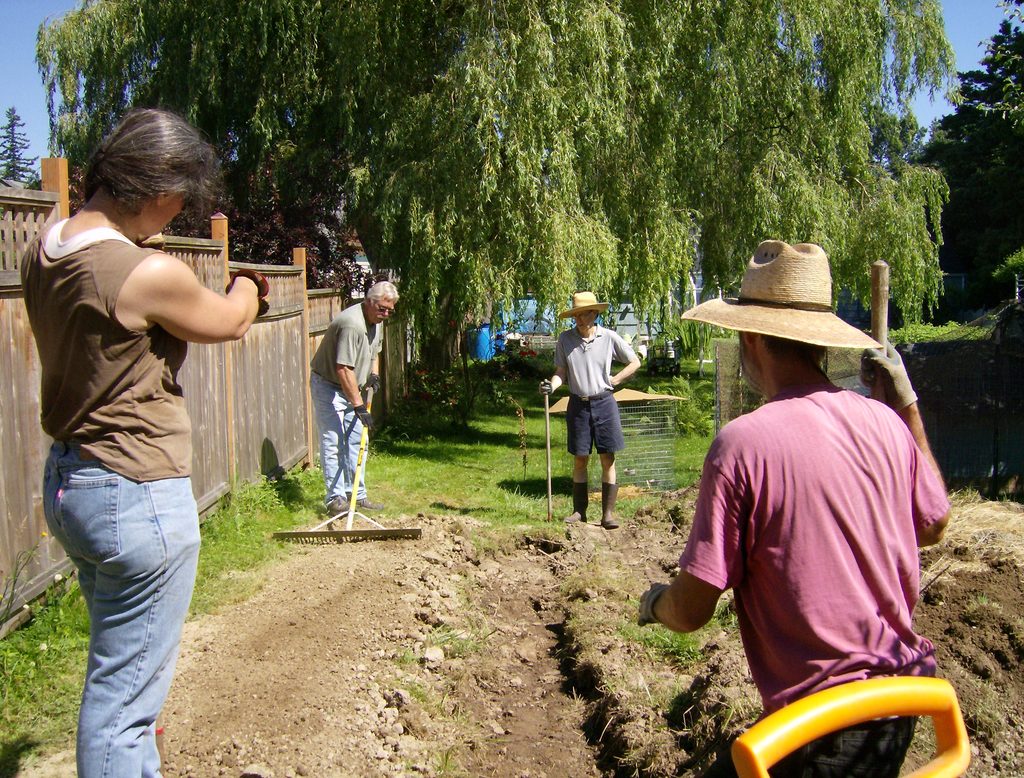 Here's one swale with the sink holes filed: 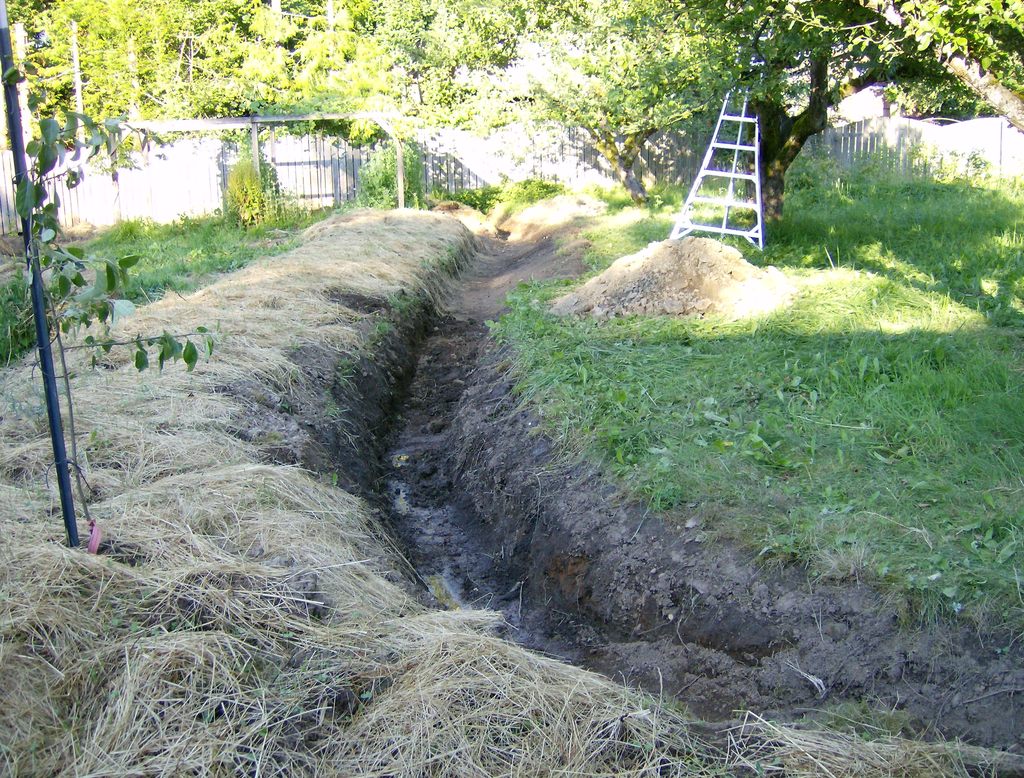 And here's the other swale with the sink hole filled: 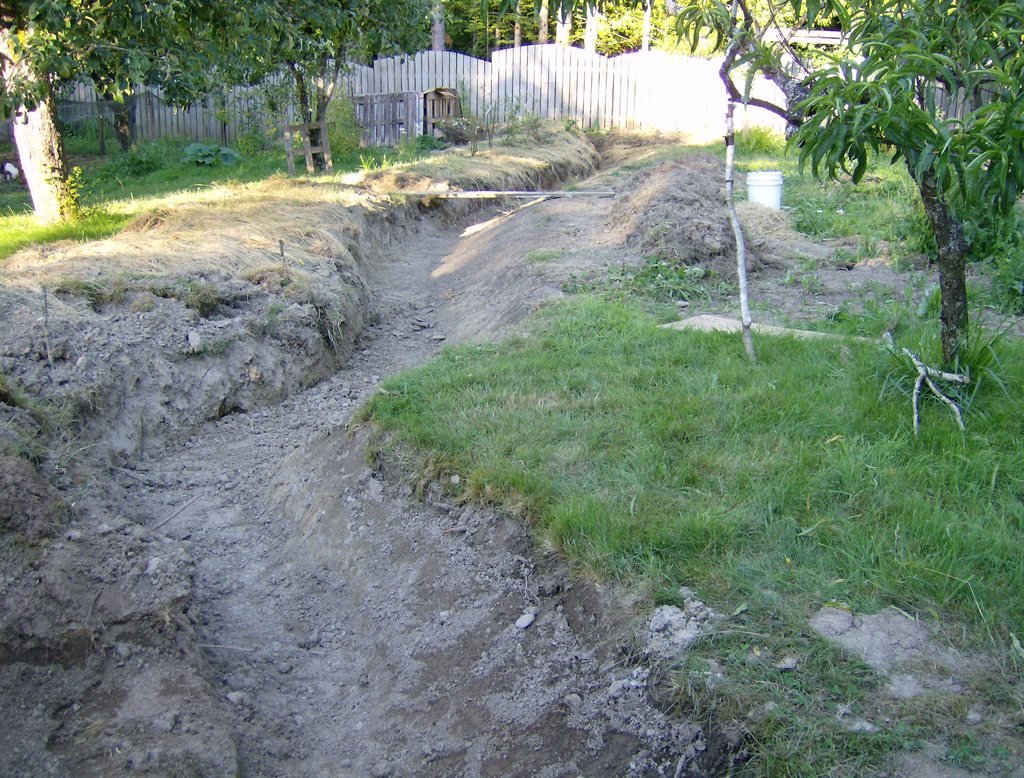 After this work was done we sat together under the willow tree and had the lunch I'd prepared. (forgot to take a photo).

Keetah knows how to take it easy: 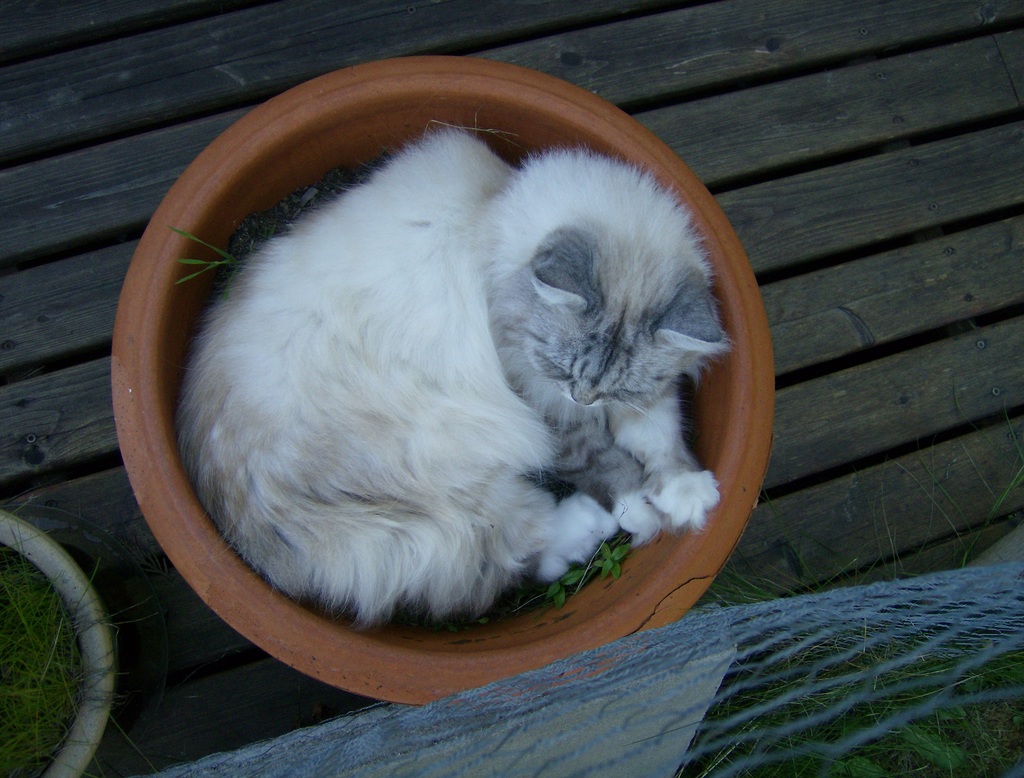 Thanks Brian, Laura, Keith and Jerry!

Oh and Yes, there is more to do on the swales but the bulk of the work is done. We'll be keeping a photo journal of how the swales develop, what we plant and how they do in the rainy seasons. Here's a list of what else we'll be doing over the months and years:

*Further shaping (smoothing and rounding) the edges of the ditches and berms.

*Planting more perennials on the berms. (I'm just beginning to learn how to use succession plantings to enrich the soil over time).

*Planting grass seed on the shallow sloping sides of the ditches. This grass will later be cut with the scythe and used as biomass to add to the garden beds which are still too much clay.

*Shaping the spill ways and adding rock to further slow the water when it spills over.

*Creating raised beds between the swales for growing annuals. Since the soil is so heavy in clay, this will take a couple years of using cover crops,  adding sand and biomass, and allowing soil microbes to increase in population and do their "magic".

*Setting up worm "nurseries" on the beds between the swales to improve soil.

*Watching the swales in the rainy season to see how the water collects and moves through them. That will be the final test as to how they are working and will give us feedback on where we need to fine tune (shape the swales).

*The super dense clay that we removed from the sink holes....what to do with it? We could export it off the property. But I like the idea of finding a way to use it. Jerry (and Brian) had the idea of making a U-shaped corral with layers of clay, straw and chicken manure, and keeping a compost pile in the corral. Then as the compost decomposes, we'll scrape a little of the clay mixture into into and incorporate that into the garden beds. We might also use some of the clay to build up sections of the swale ditches and spill ways if we need to raise them up a bit.

I'm excited to see how the swales work and to know that we can change them in subtle ways as the needs arise.

Anyone who attended this swale making event and remembers more attributes or functions of swales please add them below in the comment section.