Check out Part 1 of this blog post series here, and Part 2 here. Part 3, below, features the third video in a series on the theme “Standing for the Future” by Rev. Michael Dowd.

“These three videos are the culmination of my life’s work to-date and, by far, my most important legacy contribution.” ~ Michael Dowd

Part 1 is about “The Evidential Reformation: Facts as Scripture, Ecology as Theology.” Part 2 is “Reality is Lord: A Scientific View of God on a Rapidly Overheating Planet.” Part 3 is on “Grace Limits and Big Picture ‘Apocaloptimism’: The Great Reckoning as Great Homecoming.”

What is ‘Apocaloptimism’? Michael Dowd first heard Theo Kitchener call herself an ‘apocaloptimist’. I’m guessing Kirchner is author of this post discussing the term, and she first heard it from NASA scientist Peter C. Griffith. She describes it this way:

Apocaloptimism is embracing the unknown, is embracing transformation. It is being okay no matter what the outcome is, but fighting like hell to steer it in the direction that you want.

Dowd has described himself as an ‘apocaloptimist’ because he is a short term pessimist (or realist), but a long term (big picture) optimist. Listen to a great interview with Terry Patten here.

I provide below some teaser screenshots from this third video, to entice you in and to reinforce some key points. 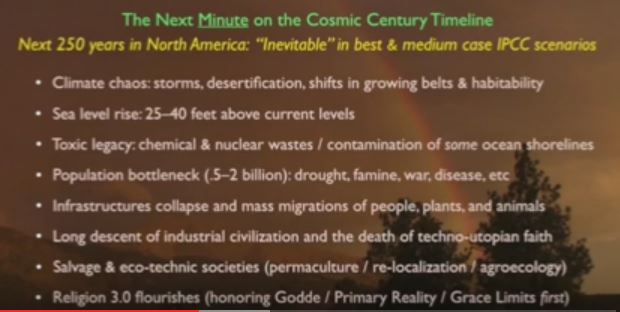 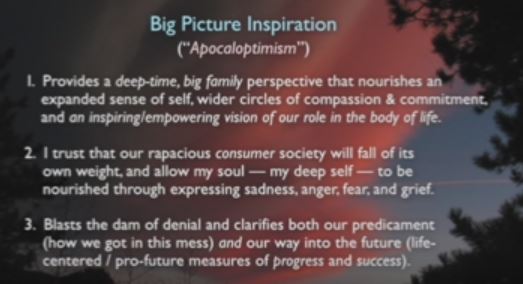 The quote from Teilhard de Chardin above is important.  Dowd believes that one of the most important systemic changes that needs to happen in the world is for us to learn to align self-interest with the well-being of the whole. My wife and I found the following quote from the presentation to be very meaningful:

“[One of the] most important systemic things we need to do is to align self-interest with the well being of the whole. That’s how evolution has proceeded to create greater complexity over time.

When the self-interest of the parts and the well being of the whole are aligned, then when the part does well for the whole, it [the part] benefits. And when the part harms the whole, then it harms itself in some way.

So it is in its own self-interest to do the right thing to the whole. It’s called “consequence capture” – the impact of individuals and groups, for good or ill, must be reflected back to them.”

The following introduction to the video is copied and pasted from the webpage “Standing for the Future.”

Standing for the Future (Part 3 of 3) — “Grace Limits and Big Picture ‘Apocaloptimism’: The Coming Great Re...

Given our impact on Earth’s climate, the seas, and other species, humanity is already beginning to experience The Great Reckoning. The good news is that this is also The Great Homecoming: the prodigal species, after squandering our inheritance, coming home to Reality (God).

Big History — the Epic of Evolution or Universe Story — is humanity’s first and only inclusive, globally produced, evidence-based creation story. In this culminating episode, Dowd shows how this Great Story provides clear and compelling guidance to help our species ‘obey’ (honor) physical and ecological processes that have been at work for hundreds of millions of years. He offers both practical tools of resilience and an empowering vision of collective action in response to climate chaos and other large-scale systemic challenges.

Michael and Connie are currently engaged in a speaking tour in the northwest U.S., with upcoming vists to Edmonds, Whidbey Island, Seattle, Orcas Island, and Bellingham, WA, in January 2017.  Check out their itinerary here. Our Transition Whatcom event listing is here – Jan. 22nd (Sunday morning) and Jan. 23rd (Monday evening), both at Bellingham Unitarian Fellowship.