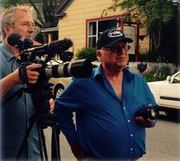 Redefining Prosperity is the story of the transformation of culture and economy in California’s largest Gold Rush town -- Nevada City. With its legacies of environmental devastation and extreme mistreatment of both the native Nisenan Indian people as well as the immigrant workers who built many of the mines, Nevada City citizens transformed it into a model community with emphasis on protected common resources, respect for others, local organic foods, artistic creativity, tourism, and citizen engagement. It’s the story of how the fight to save the beautiful Yuba River from being dammed by a foreign corporation brought together previously conflicted segments of the community. Redefining Prosperity provides a powerful message about the importance of working together at the local level to make great changes that can reverberate around the world. A little town in California's Sierra Foothillls shows us how.

Stick around for a discussion afterward, and help us celebrate TW's 10th Anniversary!

On Feb. 28, 2009, Transition Whatcom was officially recognized as the 17th Transition Initiative registered in the United States.

Join us as we partner with the Bellingham Human Rights Film Festival, First Congregational Church of Bellingham, and RE Sources for Sustainable Communities to present the latest film by John DeGraaf. This will be the 4th John DeGraaf event TW has sponsored. First was the film "Affluenze," then came "The Economics of Happiness," and then we had a visit with Mr. DeGraaf himself.